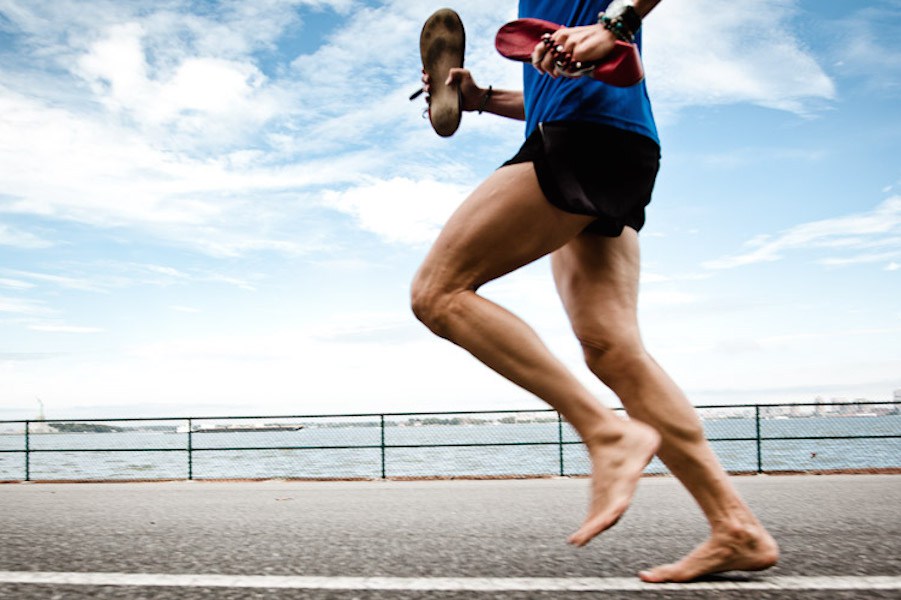 03 Jun I’ve Got Sole: The Art and Science of Running Barefoot

It’s common to see a topless runner. It’s less common to see a shoeless runner. Yet in recent years, many runners have left their shoes in the dust and are running barefoot. This peculiar workout trend is known as barefoot running, giving the expression “I’ve got soul” a whole new meaning.

Barefoot running was first popularized by Christopher McDougall’s blockbuster hit Born to Run. Proponents of barefoot running argue that running shoes cushion feet in an unnatural way by forcing runners to land on the heel instead of the forefoot, causing various muscles to weaken. By contrast, barefoot running forces runners to land on the forefoot instead of the heel, allowing them to stride at greater distances and speeds. In other words, the shoe doesn’t fit the foot. Contrary to what Nancy Sinatra’s famous jingle might say, boots are made for shoppin’—not walkin.’

Whatever the reasons used to justify barefoot running may be, the most powerful argument for the peculiar workout trend is made by example. A Kenyan tribe known as the Kalenjin has a track record for consistently winning marathons. They also happen to run either barefoot or in sandals in their homeland. The numbers speak for themselves. Only 17 American men in United States history have run a mile under two minutes and ten seconds. Approximately 32 Kalenjin’s accomplished the same feat in October 2011 alone. In the 2013 Berlin Marathon, Kenyans took not only first place, but second, third and fourth place. These numbers have driven many runners to take note of the Kalenjin’s running methods by lacing down rather than lacing up.

There are many theories why running barefoot can help increase a runner’s speed. Legs are like a pendulum. The lighter they are, the easier they are to swing. Kenyan’s tend to have thin ankles and calves, giving them a natural running advantage. In fact, some social scientists suggest that the outcome of an Olympic race can be determined by measuring the diameter of the runner’s ankles beforehand (foot?). Barefoot runners extend this reasoning to shoes in general, suggesting running shoes wrap unnecessary weight around the ankles and cause the feet to drag.

No pain, no gain.

The problem is that thin ankles and calves aren’t unique to the Kalenjin tribe but extend to Kenyan’s in general. What other factors give the Kalenjin tribe a running advantage over their Kenyan brethren? Many believe that it is the Kalenjin’s mental, rather than physical, ability to endure pain that allows them to stride great distances. In particular, the Kalenjin tribe has an initiation ceremony into adulthood that consists of beating, stinging, whipping and genital mutilation. In some versions of the ritual, mud is caked on the participant’s face. If the mud cracks from flinching, the participant is labeled a coward and is ostracized from the community. The ceremony is adequate preparation for the agony that accompanies running marathons.

Many runners are skeptical of the advantages of barefoot running. According to a statement issued by the American Podiatric Medical Association, “While anecdotal evidence and testimonials proliferate the Internet and media about the possible health benefits of barefoot running, research has not adequately shed light on the immediate and long-term effects of the practice.” Barefoot running could carry its own disadvantages as well. Approximately 70 percent of runners already suffer some repetitive stress injury each year. Barefoot running could escalate these risks. In addition, the transition from shoes to shoeless running isn’t easy. And, to be frank, most people aren’t mentally prepared to endure pain in the same way a member of the Kalenjin tribe who just underwent an initiation ceremony is capable of enduring pain.

While the benefits of barefoot running remain inconclusive, the trend continues to thrive. Whether there is a most effective way to run is a matter of debate within the running community. What can be agreed upon is that the steps to becoming a good runner first require steps, with or without shoes.