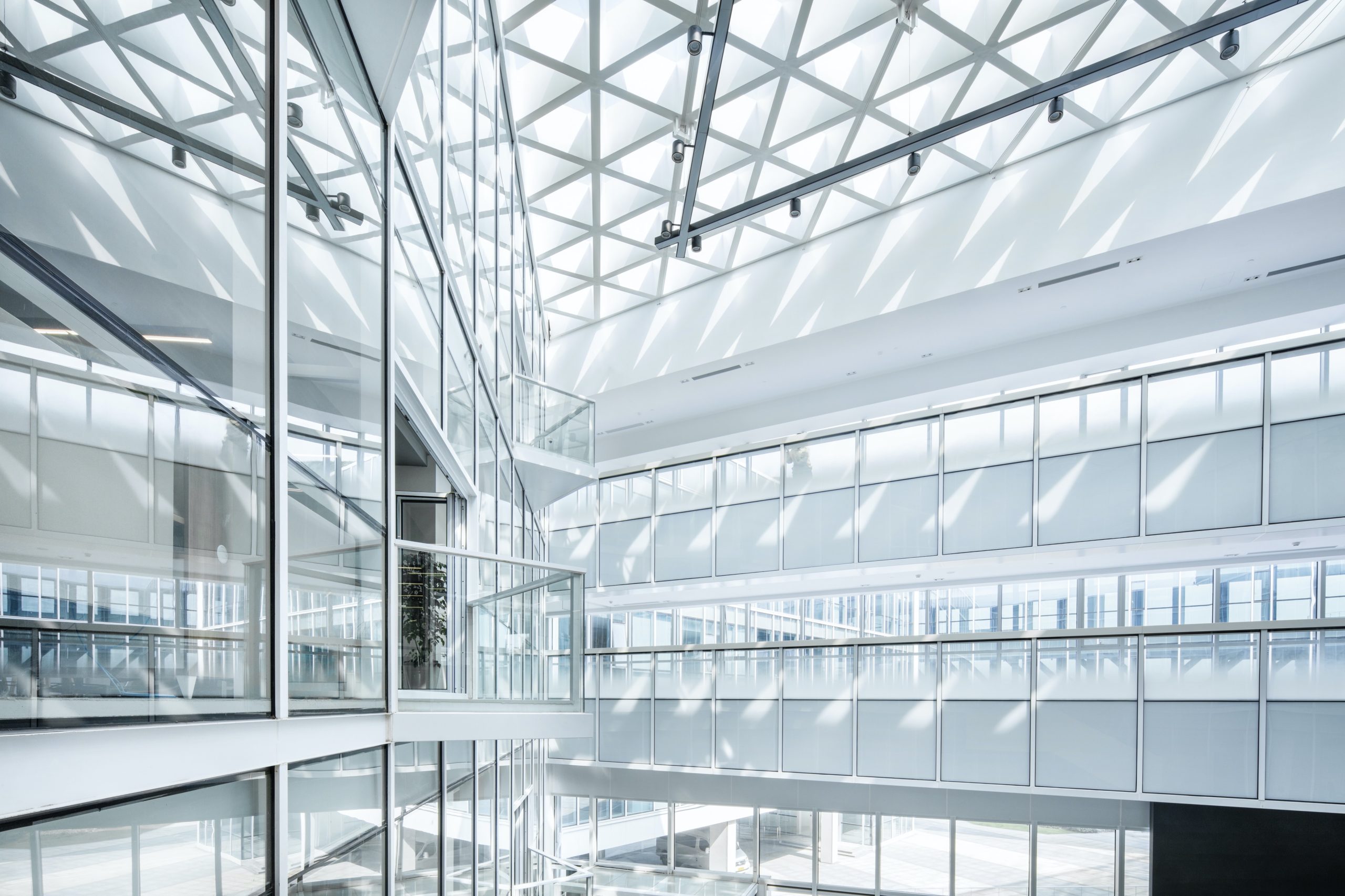 13 Feb Can Light Influence Cognitive Function and Performance in the Workplace?

Why do lighting and views matter? The eye has dual roles: It detects light to allow us to see but also detects light to tell the brain what time of day it is. These visual and ‘non-visual’ effects of light have different sensitivities to light intensity, spectrum, timing, pattern, and light history and are served by different light detectors (photoreceptors) in the eye. Both of these roles are important considerations when assessing the quality of a built environment. In today’s increasingly urban societies, views to natural landscapes are often obstructed and indoor spaces are typically illuminated with electric light sources that differ in intensity, spectrum, and exposure timing from outdoor daylight. The average person spends about 90% of their time indoors which has important implications for the wellbeing of building occupants. Any electric lighting used should optimize both the visual and non-visual responses to light.

Like most other organisms on the planet, we have evolved biological rhythms synchronized to the fluctuations of night and day. These rhythms are controlled by a circadian clock in the brain that needs to be synchronized each and every day by a 24-hour light-dark exposure. Without appropriate light exposure, our internal clock can become disrupted or even drift on its own time, leading to sleep disorders. In addition to its circadian resetting properties, light is also a stimulant and can directly enhance alertness and performance, or, at the wrong time, disrupt sleep. While there are other factors such as the pattern, timing, and history of exposure, light intensity, and light spectrum are two important factors in mediating the effects of light. In general, increasing the intensity of indoor light will increase the magnitude of non-visual effects. Similarly, increasing the short-wavelength (blue) content of indoor light will also increase its effectiveness. This is because the non-visual effects of light are mediated primarily by a novel photoreceptor in the eye that is most sensitive to short-wavelength blue light (peak 480 nm). Manipulating the light intensity and spectrum can, therefore, change the impact of indoor lighting on human physiology.

How can electric lighting impact our health and wellbeing?

Light levels typically experienced indoors (tens to hundreds of lux) are capable of inducing non-visual responses. We, therefore, need to consider the type of lighting we expose ourselves to through during the day and night to ensure that we optimize exposure to the right light at the right time, and avoid the wrong light at the wrong time. The first principle is to ensure that we are exposed to a distinct and stable 24-hour light-dark cycle each day, with bright days and dark nights, to ensure proper synchronization of circadian rhythms. The circadian system plays a key role in regulating many aspects of our physiology, metabolism, and behavior including hormone regulation, sleep-wake cycles, alertness, mood and performance patterns, immune function, and reproductive function. Disruption of circadian rhythms, for example in shift workers, has been associated with multiple negative health outcomes ranging from an increased risk in accidents, chronic diseases such as diabetes and heart disease, and some types of cancer. Maintaining exposure to a strong light-dark cycle will ensure that the circadian system, and the rhythms it controls, will be properly aligned to the 24- hour day.

How can light influence cognitive function and performance?

Light has acute effects on our cognitive function and sleep. Keeping the circadian sleep-wake cycle in proper alignment to obtain adequate levels of sleep is essential to maintaining good cognitive function. Circadian rhythms influence basic cognitive processes like attention, working memory and executive functions and learning and memory can be impaired when the sleep-wake cycle is disrupted. We can also use light to proactively increase our alertness by using light with a higher intensity and greater short-wavelength content, for example after we wake up in the morning or throughout the school or working day. For example, exposure to blue-enriched white light (300 lux, 5500K) in the early morning during winter was associated with faster cognitive processing speed and better concentration performance compared to standard lighting conditions (300 lux, 3000-3500K) conditions. A laboratory-controlled study of 47 university students found that participants reported significantly higher levels of alertness, performed significantly better on a computerized test, and made fewer typing errors when under artificial daylight (correlated color temperature = 6500K) compared to when they were under cool white light (4000K) or warm white light (3000K). Similarly, office worker exposure to blue-enriched fluorescent light reported greater alertness, mood, concentration, and sleep compared to when working in the standard office lighting, and care home occupants given better lighting demonstrate better cognition, better sleep, and less depression. There are times in the day, for example in the hours before sleep, where we would want to reduce the alerting effects of light and calm the brain in preparation for sleep. Reducing the light intensity and short-wavelength content has these effects, reducing evening alertness, making it easier to fall asleep, and increasing the amount of deep sleep.

How can daylight and views enhance occupant health and wellbeing?

Many studies on the health impacts of daylight have reported evidence for potential bene ts including improvement to vision and sleep quality and reduced symptoms of myopia, eye strain, headache, and depression. Low levels of light indoors, coupled with less time spent outdoors, have been associated with increased risk for nearsightedness, whereas high levels of daylight can bene t individuals who require more light to perform well visually. Daylight exposure and access to windows at work have been linked to improved sleep duration and mood, reduced sleepiness, lower blood pressure, and increased physical activity, whereas lack of natural light has been associated with physiological, sleep, and depressive symptoms. Office workers exposed to electric and natural lighting conditions have reported experiencing less glare and less sleepiness earlier in the day under natural lighting compared to when they were under electric lighting. Moreover, not only intensity but also the timing of daytime light exposure has been found to influence BMI in adults, with lower BMI in those who receive the majority of their bright light exposure earlier rather than later in the day.